This day had been at the core of our travel plans for more than a year. Bas (Sebastian) Pelly, youngest child of Angela and Liam, was to be married to Anna Heale in Derbyshire. From the time the invitation arrived more than a year ago we had been going to be here along with all of Majella’s siblings and many more family and friends. It was to be a big day.

We were awake at our usual time, showered, and were about eat breakfast when Jane appeared at our door. She had not had time for shopping yesterday and was in need of coffee and food so she joined us. Soon after, Virginia and Margot appeared. They were going next door to see if they could find breakfast at the Melbourne View Hotel but were soon back after discovering it is more a reception venue than a fully functioning hotel. They were breakfast guests too.

After breakfast all five of us headed off to find a laundromat. After a week or so on the road, laundry was becoming a necessity and Ramsley Fields offers no facility for that essential. Neither is there a laundromat in nearby Melbourne. We had been told of one near Nottingham and located it on a map but a search revealed more than one option at Derby which was a bit closer and the presence of more than one option reassured us.

It was good that we had more than one option. We drove to the location indicated for the nearest but found no trace of it. Margot asked and found that it had been gone for years. We drove on to the next option which was fully functioning and got things underway. Our search for coffee in the local area proved fruitless. There were two coffee shops on the map but both were closed for a week between the bank holiday last Monday and the resumption of school next week. We simply had to wait and watch the clothes tumbling in the washers and dryers.

On the way back we stopped for fuel and picked up some things for lunch. By the time we were back at Ramsley Fields it was time to eat a quick lunch and dress for the wedding. We needed to be there by 1:00 pm for the 1:30 pm start. Majella declared a 12:30 pm departure but by the time everybody was ready it was 12:45 pm before we were on the road. 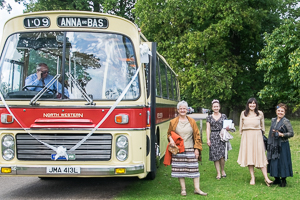 Calke Abbey is a large estate so it was not difficult to find but it is a long way from the front gate to the parking lot and then a walk to the building where the wedding was to happen. We made it with a little time to spare. A contingent of guests, including the Pelly family, had arrived in a specially arranged bus. That was indicative of the extensive planning that drove the festivities over the following 10 hours. It seemed that if there was something that could be done to make a wedding interesting and fun it was happening there courtesy of Anna’s parents.

The actual ceremony began close to the scheduled time of 1:30 pm. It was a short civil ceremony with the legalese leavened by some quirky readings, including one that compared love to having a dog. As we exited from that we were offered champagne and a variety of finger food. The bar remained open with bubbles, beer, wine and more throughout the rest of the celebrations. There was plenty of time to catch up with family and friends over the next several hours and the Kinnane siblings demonstrated their party quality early.

After the first round of drinks and snacks, while the bridal party were involved with photographs there was fun to be had with an informal cricket game on the grassy field outside. Some care had to be taken on the field which was occupied by a substantial flock of sheep that had left their calling cards spread across the green grass. There were other novelties to amuse us, including picture frames hung from a tree that offered a chance for interesting portraits. 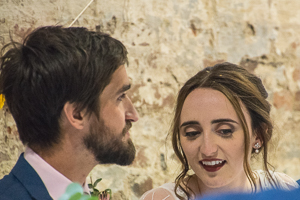 Around 4:30 pm we returned inside for the meal and formalities. The meal was served as a collection of dishes to each table so that guests could serve themselves from the selection of meats, fish, and vegetables. Dessert was served on plates with a piece of chocolate tart and a small jar of strawberry mousse. There was plenty to eat and drink before the speeches. Anna’s father, a BBC presenter, spoke well about Anna and Bas. Then the Pelly’s were let loose. One or more Pelly ancestors must have kissed the Blarney Stone. Angela, Liam, Kieran, Jessica, and Bas all spoke, though not in that order. Jess sang snatches from a variety of well known songs. Bas finished his speech by singing a love song he had written for the occasion.

The party rolled on, with more chips and pizza served around 9:00 pm, and drinks flowing freely. By that time the Irish band had been performing for a while and we had danced away the first rounds of food and drink. It was after 11:30 pm when the call came to form an arch of arms to the door so that Bas and Anna could be farewelled. Not much before midnight we were home and ready for bed.