Skip to content
HomeTwo of us2017 EuropeThe day after

At about 10 hours the wedding celebration yesterday was a major event but that was not the end. Months ago we had been invited via Facebook to Bas & Anna’s BBQ Recovery at the farmhouse where Angela and family were staying. That was scheduled for midday until 8:00 pm but the word last night was that a mid to late afternoon arrival would be appropriate. That allowed time for some other activities.

I was awake by 6:30 am so I got up, showered, and worked on the post that had not been possible when I arrived back last night after the wedding. Majella snoozed a while longer but was ready to get up when I had a message from Jane asking if I was awake and up. She was over almost as soon as I replied to have me search for and download some music to add to the video of the wedding that she was editing. She had gathered video from a few people last night and was putting it together for folk back in Australia. She also grabbed an image I had of Bas and Anna to add.

Virginia and Margot appeared sometime later. We managed to find breakfast for all and discussed options for the day. Jane and I had previously discussed getting to the Peak District for a look around and she had done some homework on Ilam, which seemed to be the closest accessible area from our location. At an hour each way for travel and time to look around, we reckoned a 10:00 am departure would get us back comfortably by mid-afternoon for the recovery party. 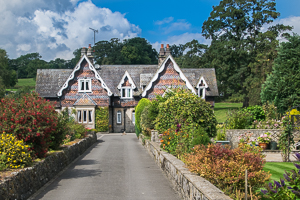 We set off just after 10:00 am. Jane had finished her video editing and had started an upload to a private Youtube channel that could be allowed to run while we were away. I drove with Jane navigating and it took us just on the hour to reach Ilam Park and find a parking space near the centre. We were immediately impressed by the picturesque village and especially the highly ornamented buildings with peaked roofs and tiles on both roofs and gables. We collected a map and pointer to where to start walking from a young man near the gate and set off for the Dovedale Stepping Stones, about 2.5 km away. 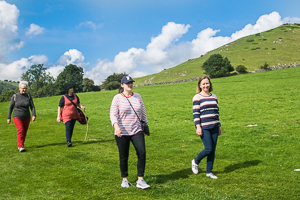 The first part of the walk was through the village and then through green fields where sheep were grazing. The main path was relatively level but included stiles that needed to be climbed over. An alternative path offered rougher ground but no stiles so we decided that might be a suitable alternative for our return. The walking was easy for the first part, past the back of Izaak Walton Hotel, named for the author of The Compleat Angler. The Dove River is one of the best fly fishing rivers in England. We did see one fly fisherman plying his craft as we walked along the river.

Beyond that we reached the information centre on the river where Majella bought a simple guide to the walk and Virginia bought a trekking pole to help her on her way. It worked because she picked up pace from that point and made the entire walk with relative ease.

We walked up to the stepping stones where we crossed the river and walked some way further up on the other side. We reached Lovers Leap before deciding to turn back because we were running out of time. Had we had time, Jane and I would have been tempted to attempt the walk up Thorpe Cloud. None of the others was expressing much interest in attempting the obviously steep uphill walk.

On the way back we paused at the information centre to buy icecreams and then walked back to Ilam via the alternative route. There were no stiles and it was rougher than the track we took out. What was not in the information was that it was steep in places. There was some heavy breathing from some of the party but we made it over the hill. On the other side we paused for a while to watch some beginner paragliders trying their skills. Nobody got airborne while we were there but we did see some, possibly the same people, take off from a higher point as we were eating lunch back at Ilam.

Back at Ilam we had lunch in the café – stuffed baked potatos for Virginia and Margot, soup of the day for Majella and Jane, and bacon and sausage bap for me, with coffees all round. It was a warm sunny day so we ate outside and enjoyed the view over the hills with our meal.

By the time we arrived back at Ramsley Fields it was almost 4:00 pm so we got away as quickly as possible to the recovery party. That was a fun affair on the large back lawn at the farmhouse. There was some food left from lunch and more appeared later as evening meal time arrived. Drinks flowed freely the whole time. Bas and his friend entertained the party for a while with guitars and singing and Bas concluded that segment with a reprise of his song for Anna from last night. Young Dulcie, Jess and Happy’s 2 year old daughter, took the microphone at one point and stole the show with her rendition of Let it Go.

Backyard cricket continued until just about everybody present had a try with the bat. There were some entertaining performances by unlikely players and some lucky and unlucky feats of play. The game continued until around 8:00 pm, when the light was getting dim and the temperature was dropping. The crowd had been thinning slowly for the past hour or so and it was time to go with farewells all round.