We are in Berlin but have so far seen little more than the street outside our hotel. Getting here took longer than expected but we are here, settled, and plan to see more tomorrow.

Breakfast at our Nürnberg hotel was available from 7:00 am so we were there soon after that, ate our cereal with yoghurt, followed by rolls with meat and cheese, and drank our coffee. Back in our room we packed our gear and prepared to leave.

It had rained through the night and was still raining gently this morning. We needed our umbrellas to walk to where the car was parked. Our return to the hotel was delayed a little by a large garbage truck working in an alley we needed to negotiate. When we go there the spaces in front of the hotel were full so Majella waited in the car half on the footpath by the corner while I went in for our bags and then back to finalise matters at the hotel. By 8:15 am we were on our way out of Nürnberg.

Traffic going out was much lighter than that coming in and we made good time to the autobahn. Once there, Majella picked up the pace. German autobahn speed limits vary. Most are set at 120 or 130 kph but there are some sections that have no limit set. Despite the mist and rain this morning traffic was moving at full speed and even at 130 kph there were vehicles whipping past at much higher speeds. However, the drivers are more disciplined than Australian drivers, keep to the right lines except when passing, and do not pass on the wrong side.

A bit less than an hour out we pulled off into a village, Pegnitz, and bought fuel, which is cheaper off the autobahn. The man in the service station tried to tell me something but his English was as good as my German so we completed the transaction and drove off without knowing what he wanted to say. 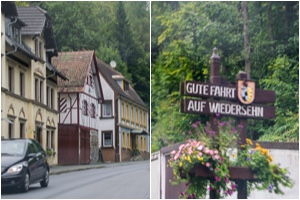 Twenty minutes further on the traffic on the autobahn ground to a halt. A check on the phone maps revealed one or more accidents ahead – no real surprise given the wet conditions and travel speeds. Traffic was sent on a deviation through Bad Berneck and up a country road to bypass the blockage. It took us more than an hour to make 5 km in that section. It did allow me time to sort out an issue with our accommodation in Krakow that Booking.com had emailed about and we got a closer view of some countryside, quaint villages, and interesting signage.

We stopped soon after that delay for coffee and changed drivers. An hour or so later we stopped again for lunch and changed drivers again so that Majella would drive us into Berlin while I navigated. We long ago worked out how best to use our complementary skills.

The GPS took us to our hotel in central Berlin without problems but the area has extensive work on the footpaths and there was no parking in the street. We found a parking garage around the corner, parked, and walked to the hotel. There we picked up a card that we can display in the car to permit parking in the streets for free. We went back to the car, brought in our essential gear, and then went back to pay for our hour of parking and find a space in the street.

Majella was tired from driving on top of our walking yesterday and a restless night. She stayed in the hotel and rested for an hour or so while I wandered about the local area a little, mostly in the Tiergarten, a large area of parkland which is mostly heavily tree covered with a few open spaces. It is also criss-crossed by paths that were being used by scores of cyclists travelling at speed on their way home from work.