Our destination for today was York. I’d selected it as a potentially interesting place close to halfway between Glasgow and London, where we need to be for the Kinnane sisters meetup on Tuesday morning. I also wanted to see some of Hadrian’s wall.

We were awake at 7:00 am and down promptly for breakfast when it started at 8:30 am. We kept it simple – muesli with yoghurt, coffee, egg and sausage for Majella, egg and bacon for me. Haggis and black pudding were on offer but we skipped those delights much to the disappointment of our hosts. We were all done and on the road soon after 9:15 am.

It was overcast again and we encountered some showers as we drove through Glasgow and south on the motorway with 3 lanes each way which was luxury after driving on the single lane roads of the Scottish Highlands. We passed through green farming country and noted the large number of wind turbines that appeared in groups on many hills.

Majella had some birthday gift shopping she wanted to do along the way so we made stops at Moffat Woollen Mill, where we had stopped on our way to Edinburgh almost 2 weeks ago, and at Gretna Green. It was just an hour out and too soon for coffee at Moffat and at Gretna Green it was all pushbutton automatic coffee machines so we skipped it there too.

My planning last night had plotted a route that went south to Carlisle and then east to Birdoswald which is where I had pointed the navigation app. Because we got off the motorway at Gretna the app recalculated and sent us cross country from there instead of back to the motorway and via Carlisle. That was fine by us because it allowed us to see more of the countryside. 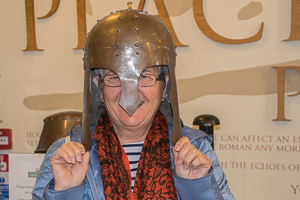 Before we reached Birdoswald we encountered signs for the Hadrian’s Wall tourist track and walking trail. We also found the Hadrian’s Wall Gateway at Lanercost on the site of the Augustinian priory that had existed there from the 12th century. The outbuildings from the priory farm have been restored and offer information about Hadrian’s Wall, a gift shop, and a restaurant where we had lunch. Majella reprised her effort from our visit to Château de la Touche-Trébry where she had tried on a helmet. The restaturant had a proper coffee machine so Majella had her cappucino and I had an espresso. Lunch was leek and potato soup for Majella and the ploughman’s platter for me with small pork pie, salad leaves, chutney, slice of bread, piece of cheddar, wedge of brie. Refreshed and informed we were ready to move on. 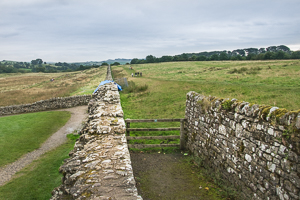 A little way along the road we found Banks East Turret with remants of the guard tower and a short section of wall. It was raining as we arrived there but that soon cleared and we were able to walk the 100 m or so to Pike Hill Signal Tower where there were more remnants. By the time we arrived at Birdoswald the weather had begun to clear a little and we were able to walk around the wall and fort without bother from rain. Birdoswald has a long stretch of remnant wall, much reduced in height from when it was in use but still impressive. It also has remnants of a large Roman fort. We caught the end of a presentation by a man dressed as a Roman soldier. That was a bit bloodthirsty for Majella’s taste but it gave some idea of how things were when the Romans were in conflict with the northern tribes.

It was almost 2:00 pm when we left Birdoswald for the 200 km drive to York. The quickest route was back to the M6 near Carlisle, south and then east and south again. That took a bit less than 3 hours with a stop for fuel. The drive was through rolling hill country with lots of cultivation. During that time the sun came out and the outside temperature rose to the mid-twenties, the warmest weather we have seen for some weeks. 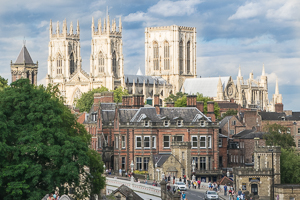 At York we managed to find parking near the railway station and were able to walk through the gate in the city walls nearby. The street was closed in preparation for a soapbox derby tomorrow and a ramp was being constructed for the carts to start. We spent about an hour exploring the streets of York, looking at the old buildings and the range of activity going on. We were unable to get into York Minster which was closed but we did get into the nearby belfry building. As we walked back to the car along the old city wall the sunlight fell on the Minster and lit it up brightly.

We are staying at the White Swan in Deighton, about 15 minutes south of the city. It is a comfortable village pub and we arrived in time to get dinner. We both had roast pork with crackling, mashed and roast potato, vegetables, gravy, and Yorkshire pudding. With cider and ale to wash it down, that was more than enough.