Our target for today was John O’Groats, as far north as it is possible to go on the island of Great Britain. That was a distance of about 200 km and the estimated driving time was a bit less than 3 hours. We expected that to be a bit longer with stops.

We were early to bed again in the Kombi and early to rise as a consequence. I was moving before 6:30 am. Majella opted for a cold shower since hot water was on from 8:00 – 9:00 on Saturday. I declined that experience but cleaned up as best I could. By 7:30 am we had eaten breakfast, left a note for Jo, and were on the road. Although rain had been forecast we could see blue sky among the clouds and hoped for the best.

While planning our route in Maps.me I had noticed that there were some neolithic formations, the Clava Cairns, nearby and just a few hundred metres off our route. Majella drove us there for a quick look before we really hit the road. There were two passage graves at either end and a central circle with some standing stones around it and rays leading to a couple of those. Most of the formation was loose stones mounded and contained within stone walls. It was different from any we had seen previously. Interestingly the nearby road ran between two standing stones adjacent to one of the graves. Perhaps it was only after the road was built that the significance of the site was recognised.

From there we drove north, over the entrance to Beauly Firth at Inverness, across the Black Isle, so named because snow did not lie and it appeared black when the rest of the countryside was white, across and along Cromarty Firth. Along the way we saw signs advertising attractions at Fearn and turned in but it was just after 8:30 am and nothing opened until 10:00 am.

We crossed Dornoch Firth and took a little diversion at Golspie which advertised itself as having an award winning beach. The beach eluded us and we drove on through Brora which had a scarecrow festival beginning today and running for a week. That tempted us to a diversion around the town where we saw a few scarecrows but surmised the action must be starting later. At Helmsdale the Highland games were on today and that tempted Majella into a loop through town. We did see the games site but were not inclined to enter and pay parking or admission for the short time we would be there.

A little way north of Helmsdale we stumbled across Badbea, the partially preserved site of a clearance village. Toward the end of the 18th century tenant farmers who had lived in the Scottish glens were forced out as landowners amalgamated holdings to facilitate raising of sheep. The former tenants were forced to find new places to live in often tenuous circumstances. Badbea was once such location atop high cliffs and with strong winds that required tethering of sheep, cattle and children lest they be blown over. We took the walk to the ruins through the heather and were pleased to see it up close but saddened by the history of the place. People had eked out a living on the infertile soil, by working on the stone wall marking the boundary of land behind, and other work that they could find. Badbea was abandoned by the early 20th century and some of its inhabitants migrated to the antipodes.

Just north of Badbea we found coffee at The River Bothy at Berriedale. We could not resist the cupcakes of the day, toffee and fudge, with our cappucino and americano. The coffee was good and the cupcakes were sticky but very tasty. We enjoyed the short break before driving on. 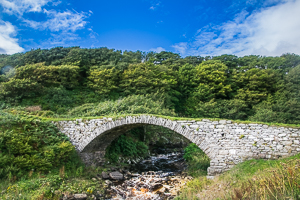 The views along the coast road were spectacular. The mix of blue sky and cloud with bright sunlight playing over the land and sea made them irresistible subjects for photography but stopping points with a view were few and far between. We were tempted off the road by signs pointing to Latheronwheel harbour. We spent some time walking around the tiny harbour which was a solid construction of stone. We watched some men launch a small boat and set out fishing while others worked at mowing the grass that must grow quickly in that climate. The water in the harbour was brown because of the peat colour in the water of the burn that flowed under an old stone bridge above the harbour. We had blue sky for most of our visit there but escaped as a few drops of rain fell.

At Wick, a little further up the road, Majella was attracted by the sign advertising that Mackays Hotel was on the shortest street in the world. It is on a sharp corner and its address is 1 Ebeneezer Place which is just long enough to fit the door that opens into the hotel which has its major sides in the other streets that meet there. Majella had also seen signs for the Wick Heritage Museum so we went to investigate that. She was unable to resist the invitation from the woman at the door so we paid our admission and spent most of an hour there learning about herring fishing and other aspects of local history. Herring was the major industry for many years and at its peak as many as 1000 boats worked from there and on the record day 24 million herring were landed and processed.

We drove on and reached John O’Groats at about 1:30 pm. According to the story it was named for a Dutchman, John Groot, who operated a ferry to the Orkneys for 4d (a groat) per trip. We looked around for a while and Majella bought another Christmas decoration before we drove a little further east and up to Duncansby Head and the lighthouse.

Rain had been threatening from the west for a while and it arrived at Duncansby Head soon after we did. We ate a simple lunch of bread, cheese and fruit, topped off with bakery treats from yesterday, in the car. The rain passed, the sun came out, and we were able to get out to look around. The wind was strong so Majella stayed in or near the car while I walked up and over the boggy hill to get a view of the cliffs away to the south. The formations there are as spectacular in their own way as those at Étretat but previously unknown to us.

From Duncansby we drove via Thurso to Scrabster where we are staying tonight at the Ferry Inn. As Majella has noted, after the past couple of nights in the kombi, a room with ensuite and 24 hour hot water seems like the lap of luxury.