This morning dawned bright and clear. We rolled out of bed soon after 7:00 am and got a load of laundry started before breakfast. After breakfast we hung that out to dry and began to organise ourselves for the day. Majella’s target for today was Saint Malo, a major port city to the north east on the eastern side of the mouth of the River Rance.

As we finished hanging out the laundry Ian was preparing to head out on his bicycle. In the course of a quick chat he suggested that parking can be problematic at Saint Malo and that it might be easier to park at Dinard on the west side of the river mouth and take a ferry from there. Majella favoured that suggestion for the sake of the ferry ride and we set off for Dinard at about 9:00 am.

We arrived in Dinard around 10:00 am and were lucky to find a parking space in the main street in front of the casino. By that time I had located what I thought was the ferry service on a map and determined that it was within easy walking distance so we set off along the promenade. We had fed the meter for an hour of parking so were in no rush and spent time looking at the wide expanse of sand left by the tide which shares its large changes in height with nearby Mont Saint Michel. When we arrived at our destination it was not open but had a sign indicating where to find the actual terminal a couple of hundred metres along the waterfront.

The walk was pleasant enough and gave us a good view of Saint Malo across the mouth of the River Rance. A ferry was docking as we arrived at the office about 10:30 am. We could not take it immediately because our parking was in a 2 hour zone. The next would be in 40 minutes at 11:10 am. In that time we would want to have morning coffee, move the car to as yet unfound longer parking, and get back to catch the ferry.  We walked back toward the car looking for coffee but it seemed nothing was opening until 11:00 am or later. By the time we reached the car it was already 10:45 and we had not had coffee or found longer parking. We decided to drive to Saint Malo after all.

Ian had warned us that the barrage that carried the road across the river from Dinard opened on the hour to allow boats to pass. Luckily we were across just before 11:00 am. Traffic and parking were challenging in Saint Malo. The signs near the old city indicated more than 200 available spaces but it took us 20 minutes to trickle through the last few hundred metres into the underground carpark and find a space.

Entering Saint Malo by Porte Saint Vincent at about 11:45 am and looked for coffee. By that time restaurants near the gate were setting up for lunch but Majella persuaded a waiter at Brasserie du Lion D’Or to give us a table. We had coffees and crêpes before setting off to explore the city.

We walked out Porte Saint Thomas to admire the view over the water before climbing the stairs to the ramparts. Majella spotted an establishment offering fish and chips and noted that for lunch. We walked around the ramparts, admiring the views across the water and back into the city. Seagulls and other birds soared and swooped over the ramparts as though looking for opportunities to snatch food from people walking there. We did not see any attempts by the birds to snatch food but they certainly seemed to be hovering with intent.

The city walls on the seaward side fell to a series of rocky outcrops that bounded sandy coves. Majella could not resist a sandy beach so she and I walked down to one that had an enclosed area for swimming while John and Pauline continued on to a nearby grassed bastion we designated as a meeting point. She had neglected to bring her swimming togs but was not deterred from testing the water. After Majella had wet her feet sufficiently we climbed back up to meet them. 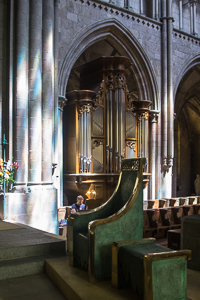 From there we walked through the old city until we came to the Cathedral of Saint Vincent de Saint Malo. There was a young man playing the organ so we sat for a while and enjoyed his recital. We also admired the altar and other furnishings which were really pieces of sculpture rather than furniture. The altar was supported by a metal structure with modernistic representations of the four evangelists, one at each corner, using the conventional symbols of eagle, ox, lion and man. Other parts of the church were decorated in an equally modern style with some older pieces that had been preserved after the destruction of the Second World War.

We returned to the Porte Saint Thomas where we had fish and chips with white wine or beer at La Buvette des Bains. The fish was too heavily coated in batter for some tastes but the chips were appreciated by all. They seemed different from what we are used to but we could not determine what that difference might be. Perhaps it was the oil used to cook them.

After lunch we walked back to the car, pausing for some time to watch a caricature artist ply his trade. Pauline was tempted but the wait was too long so we moved on. On our way back to Trébry we paused at Plélan le Petit, where we had shopped on our way back from Mont Saint Michel, to pick up some ingredients for dinner. Majella cooked ham marinated in cider and potato bake with leeks from a recipe in her book of Normandy recipes she had bought at Mont Saint Michel.

Tags:Europe, France
« Josselin
Easy does it »