This was our day to explore Portwenn (actually Port Isaac), the location of the Doc Martin television series more thoroughly. We also planned to take a side trip to Land’s End to complete the End-to-End journey we had started at John O’Groats a bit more than a week ago.

Breakfast at the Slipway Hotel was between 8:30 am and 9:30 am so we had plenty of time to wake gently, shower, and check overnight news before breakfast. Most surprising was Jane’s Facebook post about their unplanned trip to hospital for Virginia who, by the time we read about it, was recovering from whatever foodstuff had disagreed with her.

There was rain threatening as we walked down to breakfast so we went prepared for that. Muesli with yoghurt and coffee was followed by Eggs Slipway, poached eggs on ham on toasted muffin with hollandaise sauce. While we were eating breakfast a couple from Moree who are staying in the same B&B arrived and we chatted for a bit about our travels and plans for the day. They had hire car problems which they hoped to sort out quickly so they could drive to Land’s End earlier than we planned.

Breakfast was done by 8:50 am and then we went as quickly as possible to the top of the hill to feed the parking machine by 9:00 am. We made that comfortably for time if not for breathing after the hill climb and walked back by the path that runs along the cliff and enters the village at the top of the street on the east side of the bay. That afforded great views of the coastline to the north-east and of the bay that Port Isaac sits in. 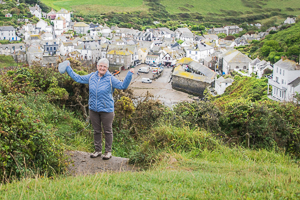 Our walking tour of Doc Martin locations was scheduled for 11:00 am so we had some time to explore on our own before then. Majella had come prepared with images that she had captured from a Doc Martin episode and planned to recreate if she could find the locations. Rain was sprinking gently as we set out on that mission which took us around some of the lower parts of the village and then up the road on the western side of the bay and out on the track to the cliff top where Majella managed to find the location for her final image overlooking the village. As we walked the rain stopped and we had some sunshine. Majella later matched her images from today with those from the show and posted the result on Facebook. She was well pleased with her efforts.

By the time we had done all that it was 10:40 am and time to think about the walking tour. We walked back to the rendezvous point outside our B&B. I had coffee from the ‘May Contain Nuts’ store that acts as the hub for the tour. Majella inspected the offerings in the store and then sat and waited for the tour to begin. There was another sprinkling of rain as it started but the rain soon stopped and our tour was mostly in sunshine.

Our tour guide, Dave, lives locally and has worked as an extra on various episodes from the first series until the most recent which was shot earlier this year and will go to air soon. He was full of information about the production, the actors, and the various locations that he walked us around for about 90 minutes. The tour had eight participants including us and was paced for people of our age but it still gave our legs and lungs a good stretching. We enjoyed the experience and look forward to recognising locations as we watch the next series.

When the tour finished at the bottom of the village we went to the fudge shop (Mrs Tishell’s Pharmacy) to buy some samples and then walked back to our room via May Contain Nuts where we bought a Doc Martin T-shirt that Majella thought suited me. After coffee in our room we set off back up the hill to the car for our trip to Land’s End.

Majella drove the 10 km or so to a main road along narrow country roads with passing spaces much less defined than those in Scotland. There were a couple of tight squeezes to pass oncoming cars and one shallow ford to negotiate before we reached the highway. Most of the rest of the way was on good roads and we were there around 2:30 pm. 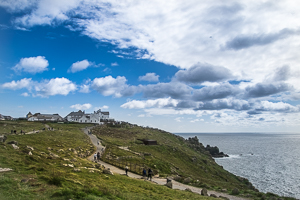 Land’s End evidently attracts much greater crowds than John O’Groats and has a correspondingly more grand set of buildings and activity. Parking is controlled and managed at the entrance where we were required to pay before searching for a space among the hundreds of already parked cars. We were lucky to find one just a short walk to the centre where we took photos of the End-to-End sign matching the one at John O’Groats and ate Cornish pasties for lunch. They were tasty enough but neither of us needed the full quota of pastry. 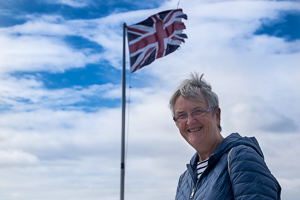 The centre offered bargain deals for a set of local attractions, including the Shaun the Sheep exhibit. We avoided those but did walk to the First-and-Last (a local catchphrase) house and store for a view from the point. The condition of the Union Jack flying there is testament to the winds that blow more or less constantly. We did not have time to stop for a drink at the First-and-Last Inn on the way back out but Majella stopped at the First-and-Last Post Office to post a late card to Ben. We can hope it beats us home from the end of the earth (or at least Great Britain). 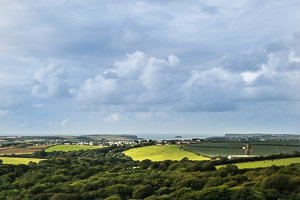 We had seen a lot of wind turbines on the drive down and there seemed to be no lack of wind to drive them. We had not noticed solar farms on the way down because of how they were placed on the south facing slopes but we did see several on the way back. We were lucky to have had sunshine on the drive down and for the hour or so we spent at Land’s End. On the way back we met some heavy showers that interrupted the sunshine but did not interfere with the pleasure of seeing the sunshine over the fields of Cornwall.

Neither of us was hungry tonight. Perhaps that was the result of our late lunch of pasties or of eating so many large meals over the past few days. We skipped dinner but had a drink in the Golden Lion (Crab and Lobster to Doc Martin) before going for a walk over the beach to the harbour wall which was easily reached with the tide out. We also walked a little into one of the caves, reputed to have been used by smugglers, that was accessible with the tide out.

Tomorrow we are on the road again to Derbyshire in preparation for the wedding on Friday. That will be a long day of driving to be followed by partying.