Today was to be a major travel day so we were up a bit earlier to ensure we made our flight from Paris to Birmingham. Breakfast was the last of the farm eggs, the last couple of slices of bread toasted, fruit and coffee. Our suitcases have increased in weight over the past five weeks and we had some serious decision making about what would have to be left behind to meet the baggage allowance on our small plane flight across the Channel.

It had rained again as we rose this morning, enough to close the skylight but not enough to cause us problems with getting our gear in the car and away. We had handed back the key of our pigeonnier to our hostess and were on the road just a few minutes after our target of 8:00 am. 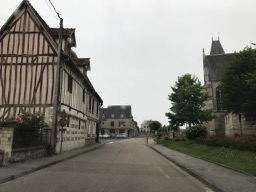 Majella drove to Charles de Gaulle airport by mostly the same route we took last Sunday with John and Pauline. Lyons la Foret was much quieter without the Sunday market and the same was true of Villers en Vexin where we had stopped on the way back. There was rain or the threat of rain all the way but it seldom was more than a sprinkling. The highway driving was interrupted periodically as the road passed through villages.

As we approached the airport we encountered serious congestion which we learned later was related to the Assumption Day holiday on Tuesday of the coming week. Likely those who can will take Monday off to make a four day weekend. Progress slowed and changing lanes at the bidding of the GPS was a challenge.

The GPS in the car came with the return location already programmed but the description was unclear so I was hoping I had selected the correct address. We turned out of the traffic just before that point but the destination seemed to be set a bit short of the actual location. I recognised it across a roundabout and from there the return process was simple. We parked and removed our gear, they checked the car, I signed some paperwork and we were done.

A young man from the leasing company drove us to our terminal. He knew the back roads around the airport well and managed to avoid the congested traffic. That saved some time that was soon eaten up in the series of queues – automated check in for boarding passes, baggage tags that could not be printed in the first operation, baggage drop, passport clearance, and security. Boarding passes and/or passports were checked at each stage.

We reached our gate in plenty of time. It was downstairs, which then required a bus ride to the aircraft. We had coffee soon after getting to the gate and ate some of the biscuits Majella was carrying with that. Sometime after we heard that our flight was delayed by about 45 minutes we decided we were hungry and went to buy food. As we reached the head of that line the time came to board buses. We munched our shared short baguette with salami and gherkins as we stood in line for the bus.

From that point the flight was smooth, though we were well separated in the seating for some reason. We arrived in Birmingham and cleared immigration quickly. Our bags were among the first out on the conveyor but the Avis desk was closed and we had to go to the rental car yard to deal with that.

Soon enough we had our Ford Festiva – manual as expected and not as well equipped as the Citroen Cactus we had been driving in France. We particularly missed the onboard GPS and the cruise control. Majella took the wheel while I dealt with navigating us to our accommodation, about 280 km north. My Free SIM has roaming data and that kicked in so I was able to get live navigation on Maps. It took a little while to sort out how to pair my phone with the car bluetooth and get music and driving directions through the car speakers. From that point it was straight up the M6 with occasional slow patches caused by roadworks. 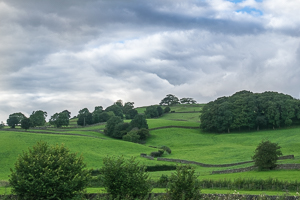 We arrived at Ings around 6:00 pm and found Meadowcroft Guest House easily enough. However our host was surprised to see us as she was not expecting more guests tonight. When she checked her systems against my documentation, she found that there had been a computer error, and very apologetically suggested we go to the pub for 30 minutes while she sorted things out. We wandered the 200 m to the pub, had a drink and a small meal, soup with bread for Majella and crumbed & fried brie on a bed of greens for me, and then came back to find our room ready. The land lady’s son is sleeping on a sofa somewhere tonight we think. The room he has vacated for us, willingly or not, is very comfortable and has a view across the road onto rolling hills crisscrossed by stone walls dividing fields. 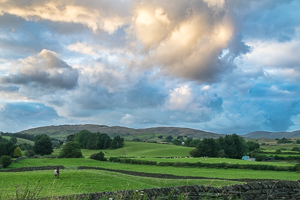 Majella was tired from a long day so we retired early to enjoy the view from our window and prepare for our day around the Lakes District tomorrow. As the sun sank further and the light on the hill across the road changed I was unable to resist the temptation to get back outside with my camera. It was not a spectacularly coloured sunset but it was interesting to see how the changing light affected the sky and the fields as the sheep and horses went about their business.

Over the past month we have grown accustomed to being settled in one location – 3 weeks in Trébry, a week at Croisy sur Andelle – and using that as a base for exploration. From now we are on a different schedule of moving from one short stay to another. Mostly it will be one or two nights at a place with occasional stays of three or four nights. That change of pace will require some changes in how we operate.