The weather forecast for today was wet. In fact, we had seen signs on the highway with a yellow warning predicting heavy rain. It was not going to be a day for extensive outdoor pursuits like long walks but was better suited to driving between mostly indoor venues. We had no fixed plan but wanted to see Loch Ness and visit at least one whisky distillery.

We were early to bed last night and slept warm and soundly in the Kombi until early morning. We woke around 6:30 am but waited a while before venturing over to the house and organising our breakfast of muesli, yoghurt, and coffee. Jo and her daughters were in the kitchen so there was some light conversation with breakfast.

By 8:30 am we were on the road and following driving directions from my iPhone for Loch Ness. I paused briefly by the Culloden Moor battle site, which did not open until 9:00 am, and then drove on round Inverness to the top of Loch Ness. I had pointed the app at ‘Loch Ness’ and it selected a point some way down the west side of the loch. I stopped once or twice along the way and took a couple of photos of choppy water surrounded by misty hills.

At the Urquhart Castle carpark we stopped for a look and decided that paying to walk around a ruined castle in the rain was not a good deal for us. I took a couple of photos and we headed back up the road a little way to the tourist information centre at Drumnadrochit. There we picked up some brochures for whisky distilleries and noted one at Muir of Ord which was north and accessible by a back road from where we were. Going back by a different route to see different country is always a preference so we headed west over the hills and north.

As we went over the hills the temperature registered by our car dropped to 11ºC, down from the 14ºC it had been registering, but it rose again as we descended. We passed through Beauly and arrived at Muir of Ord where we easily found the Glen Ord distillery. Majella was hoping it might have a coffee shop but was out of luck on that count. However we were in luck  on another count, because while they were unable to accommodate us on a tour until 12:00 noon which was still more than an hour away, they did give us free access to the exhibition and to a tasting. We spent some time learning about the process of whisky production and the specific qualities of The Singleton whisky made there before tasting the product. It was a bit strong for Majella but I enjoyed it.

I drove back into Muir of Ord to find coffee. We saw one place, in the Muir of Ord Hub, on the left and another, Bad Girls Bakery Cafe, soon after on the right. Majella had seen the latter advertised somewhere along the way so I turned back, parked, and we went in. It was full so we bought treats to eat later and walked back to the other place where we were able to easily get seats and coffee.

It was still only 11:30 am and too early for lunch. We pointed the navigation app to Aberlour, the location of another whisky distillery for which we had picked up a brochure at Drumnadrochit. That track took us up the Black Isle a way and then over Moray Firth bridge at Inverness. Along the way to Aberlour we stopped in Elgin for a quick lunch of Scots pie for Majella and sausage roll for me. 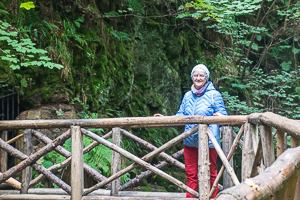 At Aberlour we found Glen Grant distillery. It was much closer to Majella’s ideal distillery with a 20 acre Victorian garden and a coffee shop. For £5 each we were able to stroll around the garden, up a path along a gorge, take the distillery tour, which we declined, and taste 2 types of whisky. We started by walking through the garden and up the gorge by which time it was 2:30 pm and time for coffee since Majella will not drink it after 3:00 pm. The whisky tasting followed. The young man told us about the 8 to 15 year old standard whisky and the 10 year old special. He left us to pour our own tasting for the first while he went to fetch the second. We were gentle with the pouring but it was still a bit strong tasting for Majella. In the end we decided that it might not be wise to drink two samples and then drive so I drank Majella’s sample as well as my own and she took over the driving. I’m thoughtful like that. 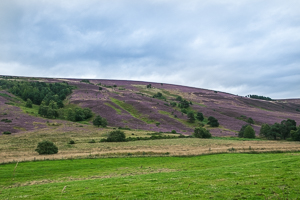 One of our simple pleasures in driving around Scotland so far has been the purple heather on the hills. We saw some in the Lake District last weekend but there is much more here. We do not recall having seen it on past visits in 1995 and 1998, probably because those visits were in June or July and too early in the season for the blossom to be so apparent or perhaps it was the effects of the whisky. Whatever the reason we were impressed enough on the drive back from Aberlour to stop for a photograph or two of the purple on the hills.

We drove back to Culloden and went to the visitor centre but neither of us fancied paying £8.50 for the privilege of walking miles around a battlefield in the rain. I browsed the store for a while and then we headed off to see what more we might find. We considered going into Inverness for a closer look but it was approaching 5:00 pm and we were not keen to brave the rush hour traffic.

Instead we headed east, back along the road by which we had returned from Aberlour to Cawdor thinking we might have a drink before returning here to eat bread and cheese with wine as we had yesterday. We had earlier bought some cider and more wine so we were prepared for that. We found the Cawdor Tavern, a charming heritage location, and decided to eat there instead. Bread and cheese might serve for lunch tomorrow. Majella had salmon on salad and I had roast chicken with vegetables and a pint of very dark ale.

We are now back at the kombi and preparing for our second night of glamping. Tomorrow we head further north.