We woke this morning to find the power still out. My Fitbit alarm had gone at 6:00 am in anticipation of an early start for a long day out but, seeing no sign of light on our charger station, I rolled over for another 30 minutes. When I was out and dressed I went down to begin boiling water for coffee on the gas stove while Majella showered in the dark bathroom. We were all down and eating breakfast before 7:00 am, wondering how extensive the power outage might be.

There were no church bells at 7:00 am so we deduced that the outage was wider than just us. That eliminated any local fault but no more. After breakfast I walked to the other end of town where I could get good enough phone service for data and searched for news. I found nothing that shed any light on the lack of power.  By that time the sun was shining brightly from a mostly blue sky.

We were reluctant to try going far if the outage was widespread and we might not be able to get fuel but we had half a tank so could drive some distance to see what was happening. We decided to go to Moncontour with the option to go on if we found the outage was local. About 8:00 am we set out. At Moncontour we found the boulangerie operating as normal. Majella went in and confirmed that there was no power problem there so it must be local to Trébry. That meant there was no sense in going home to wait for power so we proceeded with our plan to visit the megaliths at Carnac and the southern beaches.

Our path took us south and a bit west through pretty countryside under blue skies with just a sprinkling of white clouds. We thought about stopping for coffee but after the first 20 minutes or so beyond Moncontour we were on highway rather than passing through towns and there were no attractive opportunities. The GPS routed us via Lorient, west of Carnac, and was then directing us via an interchange onto another highway east to Carnac.

Since we were almost in Lorient we decided to take a chance and go into town hoping to find a cafe with a water view. We drove the streets of Lorient for a bit without success. We did cross over water on a bridge but there seemed to be little happening there before 10:00 am on Sunday. We decided to get back on track for Carnac and followed the GPS directions back onto the highway and east.

Soon after leaving Lorient we pulled off the highway for fuel but the possibilities for coffee there did not look promising. John’s information suggested that there were megaliths west of Carnac that we might not access from the highway so we decided to go cross country and closer to the coast. I pointed the GPS to Kergouric, a town near a crossing over an inlet from the sea and on a secondary road that should take us to Carnac via the area with the megaliths.

By that time we were keenly looking for coffee but saw no opportunities in the small towns we passed. As we entered Kergouric we spotted a restaurant, La Sapinière, that seemed to have some activity inside and an open door. It was not open but there were people inside cleaning up from last night. By the time we realised that we were already at the door. As we walked back to the car, they gestured through the window, opened up, and served us the coffees we were craving.

Refreshed, we drove on across the inlet and a few kilometres on came to Erdeven where we spotted a sign for the tourism office and found a convenient parking space nearby. As we arrived a group of locals began serving small portions of local produce, cold meat, Breton cake, oysters, and cider from a table in the square. We enjoyed trying some of that before picking up some material from the tourist office. As we passed by the table on our way back to the car we fell into conversation with an English woman who was visiting the area but knew where the megaliths were just out of town. She explained that and also told us about a festival at Étel, a few kilometres away on the coast. The parade with people in traditional costumes at 2:00 pm appealed to Majella. 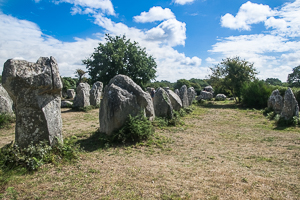 The megaliths at Erdeven were just beyond the edge of town. We paused there briefly to walk among them and take some photographs. It is impossible not to be impressed that people 5000 years ago had the capability to move and align so many large heavy stones for reasons that we do not really understand.

As we approached Carnac I pointed the GPS toward the Musée de Préhistoire which we understood was close to a major megalithic site. Traffic in central Carnac was intense and the streets were filled with pedestrians and market stalls. We wound through, into a parking lot that was full, and out again into a street where we found a space several hundred metres away and walked back to the museum. The young woman there spoke English and was able to give us directions to the megalithic sites. John was keen to visit the museum to see the artefacts on display but we were trying to balance that with Majella’s visit to a beach and the festival at Étel. We bought some baguettes with ham, cheese, and salad at a boulangerie, walked back to the car, and drove to the first megalith site at Ménec. We ate our lunch there and then looked out over the field of more than 1000 stones aligned in rows. 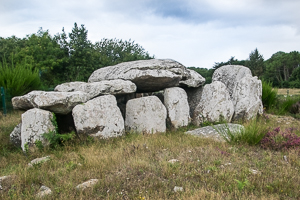 From Ménec we drove along the roads that followed the major alignments, pausing to view two more sets of large numbers of stones aligned in rows. The last set we saw included a dolmen that was more impressive than the local one at La Carouge but not nearly as impressive as La Roche aux Fées. The whole array in that area contains more than 3000 stones arranged in long lines over a substantial distance. It really is a remarkable piece of prehistory. 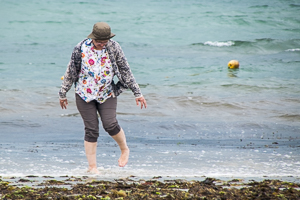 As we drove away heading back to Carnac and the museum, Majella spied a sign for a beach. We negotiated some narrow roads and streets to arrive at La Trinité sur Mer where we eventually made our way to a beach. There was a quantity of seaweed but that did not deter Majella from having a paddle before we escaped back to the car, narrowly avoiding being drenched in a sudden shower of rain from the clouds that had built up as the day wore on.

Back in Carnac, John and Pauline visited the Musée de Préhistoire while Majella and I wandered the streets for an hour. We managed to buy a T-shirt for me and blue and white striped Breton shirt for Majella before stopping for coffee and hot chocolate. While we were sitting in the cafe Majella struck up a conversation with a Dutch woman and her daughter who were visiting on holiday. Their English was very good but at one point Majella translated for them with the French waiter. 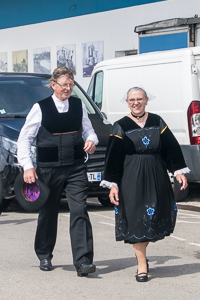 When John and Pauline emerged from the museum at 3:00 pm we drove the 15 km to Étel which was packed with cars and people there for the festival. We were lucky that somebody pulled out of a space near to the centre as we drove by and we were able to park. By that time the sun was shining brightly again as we walked into the festival area. The parade was over but we managed to see some people in traditional costume and enjoy icecreams. The musical performance that appeared while we were standing in the area was the bagpipe band from Saint Malo, complete with kilts. We had not come to Brittany to hear Scottish music so we moved on and back to the car. We did enjoy the views from the wharf across the water to the buildings and the many boats at anchor on the water. 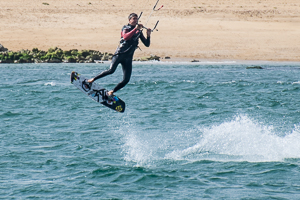 With the sun shining brightly we could see cars moving on the road a couple of kilometres away near the mouth of the inlet that the town is built around. That had to be the location of the surf beach that was advertised and Majella could not resist that opportunity. We drove to the end of the road and then walked across the coarse sand so that she could feel the cool Atlantic Ocean. There was a stiff breeze blowing and the kite boarders at the mouth were putting on a great demonstration including spectacular aerial moves.

By that time it was approaching 5:30 pm and we did not know if we had power back in Trébry. We decided to head for home as quickly as possible and stop for dinner in Moncontour at the restaurant where we had eaten on our first Sunday in Trébry. Majella drove us back to Moncontour where we arrived soon after 6:30 pm. Au Coin du Feu had just a couple of customers at that time and the man we assumed was the proprietor was playing his accordion as we walked in. He stopped, found us a table, and took our orders. Pauline had pizza, I had chicken with cream and mushroom sauce, John had the antipasto and Majella had a salad with a variety of meats she could not identify. John and Pauline drank red wine, Majella and I drank cider. Somehow Majella found room for framboise and citron sorbet for dessert.

We drove back to Trébry with the sun still shining through clouds and arrived to find the power back on. We had enjoyed a very full day in the distance covered, variety of activities, and range of weather experienced.