Today was serious bucket list work. Majella has wanted to visit Mont Saint Michel ever since she saw a photograph of it in her high school French textbook. John has also had it on his list to the point that when planning a trip to Europe last year he had tried to find a tour that included it.

We had determined from the weather forecasts that today was probably our best chance of seeing it in fair weather. Moreover, a check of the tide times revealed that high tide would be about 9:30 am, when meant that with a little effort to get away early we could arrive in time to see the high tide and watch it ebb away. The tide in that bay has the highest rise and fall in Europe, up to 15 m, and the relatively flat sea floor results in a large expanse being exposed.

With time to park and take the shuttle we estimated needed to be away by about 7:30 am so we were up and breakfasted early. We got away on time and had a smooth run to the parking areas for Mont Saint Michel. There was a slight delay with the shuttle but we were standing near the bottom of the Mont by 9:30 am, ready for photographs with the iconic building in the background. The tide was full but the path from the end of the bridge was unaffected and we were able to walk in and begin our climb to the abbey.

We paused for coffee before starting up. Majella and Pauline decided that they needed fuel and that waffles were in order. The shop was unable to provide the café creme that John wanted so he declined. I ordered a waffle with strawberry to share, an espresso for me and a lungo for Majella hoping they might include something to soften it. They didn’t but Majella struggled through most of a black coffee and half a waffle before we started up in earnest.

The path sloped up and around the hill with occasional breaks for stairs. Some way up we went into a store that had an access out to the ramparts and continued winding up the outside. There were sweeping views across the bay toward the flat seashore in the bay and further off to the north we could see the southern cliffs of the Normandy peninsula. Eventually we came to the entrance to the abbey. At that time of day the crowds were small. We were able to buy tickets without waiting in line. We opted for the self-guided tour which included a small explanatory pamphlet in English. The route for the visit continued winding up several sets of stairs and Majella was glad that she had decided to bring my walking pole along for the day.

Construction of the abbey occurred over several centuries in multiple stages. In places it is firmly wedded to the base rock of the Mont. In other places there are two or three levels supported by a succession of pillars and vaulted spaces with some requiring buttress walls for extra support. The cloister area is undergoing renovation, another in a series of renovations over the centuries. That area has a central space open to the sky surrounded by columned arcades. Because it sits above another interior space its base is sealed, originally by lead and more recently by a slab. Historically it was filled with soil and supported a garden. Excess water has been run out of the gargoyles or used to serve the kitchen. Other spaces are equally ingenious in their design to serve the needs of the monks for spaces to pray, eat, sleep, and work at scribing and other tasks.

Majella and John were well satisfied with the visit that allowed them to check an item off their respective bucket lists. Our visit to the store near the top of the abbey was also successful. Majella bought a book of recipes from the Normandy region and Pauline acquired a striped Breton-style top. We were all pleased to know that we had reached the end of the upstairs walking and that it was all downhill from there.

The crowds had grown since we arrived and we struggled at times against the flow of people trying to get up to where we had been. On the way down we stopped at a restaurant for lunch – fish soup (John), chicken and chips (Pauline), ham and sausage with salad (Majella and me). 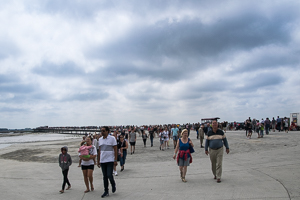 By the time we reached the foot of the Mont and started to find a shuttle to the parking lot we were well convinced that our early start had been a smart decision, as much for avoiding the crowds as for seeing the tide at its height and approaching its low. The frequency of shuttles had increased since the morning and we did not have long to wait before we were on our way back across the bridge and into the parking lot. The shuttles are an interesting design with driving positions at each end. That avoids the need to turn them in the narrow space at the foot of the Mont at high tide. The driver simply goes to the other end of the shuttle and drives back the way they came.

As we drove away we took a few minutes to visit Moulin de Moidrey, a working windmill. It was interesting to see how little of the sails needed to be exposed in the wind to generate sufficient power to grind. There was a store in the base of the windmill selling flour ground on site.

There seems always to be a château garden to see. On this occasion it was the Jardins du Montmarin near Pleurtuit. This château and its garden were in much better condition than others that we have seen. It was clear that there was considerable effort made to maintain both the building and the extensive gardens. We were especially impressed by the wide variety of hydrangeas in the garden in different colours and formats. The intensity of the colours seems to be much deeper than we are accustomed to.

On our way home we stopped in at Plélan-le-Petit to find a supermarket and pick up essential supplies. They included sausages and patties that we cooked on the barbecue that Debbie had bought recently and invited us to use. The weather had improved through the day and was warm and bright enough for us to eat outside.