Dinan had always been on our list of places to visit. Majella had seen a photo of it in the Airbnb listing for our cottage when we were looking for places and it was one of the attractions of Trébry. It was described as being an easy 30 minute drive away and we thought it would be a suitable excursion when we expected the weather to be improving but not yet as good as what we hope will grace our trip to Mont Saint Michel.

We were up at our now usual 7:00 am but decided to take advantage of the expected fine day and do some laundry before heading to Dinan around 10:00 am. The GPS took us out to the highway via Saint Glen and Penguily and then onto another highway heading east. We made it to Dinan, picked up fuel, and then found a parking space near the old city walls. From there we walked into the old town and down the street to the tourist office where we collected maps and suggestions for walking the town.

The tourist office was adjacent to the citadel which occupied one corner of the city wall. It was an impressive set of fortifications and we were keen to walk on the ramparts for the view but decided against paying to visit the citadel immediately because there was access to the ramparts from elsewhere on the city walk we planned to follow. Instead we headed off on the walk which took us down the street, around a square, and up another street where we hoped to find coffee.

We found our coffee and hot chocolate at the Café Hôtel du Théatre, not far along the walk and at the corner of Rue Saint-Claire where the interesting shops and buildngs began. From the corner outside the café we could see the Tour de l’Horloge (clock tower) and lots of action in the street accompanied by the sound of street musicians. After coffee we wandered down the street, stopping to listen to the musicians and, in some cases, to inspect the offerings in shops. It was obvious that the tower would offer views worth the 4 euro price of admission so John, Majella and I climbed the tower while Pauline waited below, enjoying more of the stores and music. Despite the still grey skies, the views from the top of the tower did not disappoint. The video presentation about the history of the city and tower added extra interest on the way up. 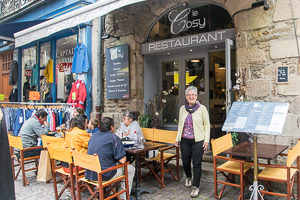 There was plenty to see in the streets along the walking trail but we added by making a couple of minor deviations so that it was almost 1:00 pm by the time we reached the church of Saint Malo where we admired the vivid colours in the stained glass. By that time we were needing lunch so after some minor debate about where to eat we settled on Le Cosy Restaurant. That proved to be an inspired choice. Majella and John had moules (mussels) and were more than impressed by the quantity and quality of what was served. The liquid in the bowl was enjoyed as soup after the stacks of mussels had been demolished. I had local sausage with chips and salad. Pauline had a tartine which was good but large and cheesy – we had the remnant of that with our dinner.

After lunch we continued our walk to the city gate from which we had access to the top of the wall. By that time the sun was shining through gaps in the clouds and we had glimpses of blue sky to enhance the views across the city. We walked along the ramparts to the next gate and then back through the city to our car. We had walked around a large loop and finished only 500 metres or so from the car so it was an easy walk back. 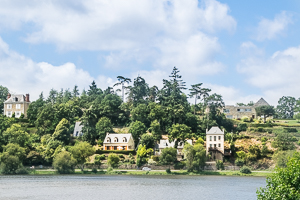 On our way to Dinan along the highway we had noticed signs to Jugon les Lacs which was nestled in the bottom of a valley that we crossed by viaduct. Majella and John had made some comparisons to the fabled Brigadoon so we decided to pay it a visit on the way home. We drove through the town in search of the lake which was just beyond it. There was a fair crowd of people there engaged in a variety of activities including petanque, climbing on a tower, and archery. The lake also had boats of various kinds that were not in use today. We looked around for a while and then headed for home, pausing to get a good look at the high viaduct that crossed the valley.

On the way home we paused at Plénée-Jugon to buy bread and then took the back roads to Saint Glen and our familiar track home. The laundry was dry by then so there was little to do but relax, prepare and eat dinner, and relax until bed time. We plan an earlier start tomorrow for Mont Saint-Michel.