When we checked the weather forecast last night it suggested that today might start reasonably fine and then become windy and wet. On that basis we decided that today might be best spent mostly indoors, especially in the afternoon.

Rennes is the largest city in the region and we always intended to visit there at some point. It seemed most likely to offer museums and the like that would provide interesting indoor activities in case of rain. A little bit of searching turned up Musée Bretagne and as best we could determine from the website it would be open at 10:00 am during the holiday period. We planned to be in Rennes by about that time and had a few side trips listed if the weather permitted.

We were up at about 6:30 am, showered and down for breakfast. We were on the road a little before 8:30 am. The GPS estimated about an hour to Rennes via the highways so we decided to take some byways first. We had not gone more than a couple of km from Trébry when John noticed the signage for Dolmen du Carouge as we passed by. We had seen it mentioned on a sign by the entrance to Haut Bourg but had not previously found time to check it out. Given that we were not in a rush to reach Rennes this seemed a good time so I pulled over and we went back to take the side road. It was a substantial set of stones arranged to mark an ancient burial site.

For the next 30 minutes or so we meandered along country roads until we decided it was time to take advice from the GPS and hit the highways for Rennes. By 9:45 am we were in Rennes and looking for parking in the city centre. We were not sure of the museum location. The POI function on the GPS is less than helpful with such details and since I was driving I could not try other means of navigation. We found a parking space by a canal, fed a meter, and went in search of coffee. After coffee I used my iPhone to find a path to the Musée Bretagne.

Along the way we found an interesting market and explored stalls selling cheese, breads, olives, seafood, and more. Majella bought some fig bread for later in the day and Pauline acquired some olives stuffed with pimentos and and wrapped in anchovies for appetisers this evening.

When we arrived at the Musée Bretagne at about 11:00 am we discovered that we had misinterpreted the website and that it did not open until 1:00 pm in the long summer holidays. The museum was not far from the Columbia shopping mall so we headed there to fill in some time, hoping to find the charger that John needed for his camera and a micro-USB cable that would allow Pauline to charge her phone in the car.

The FNAC store seemed our best chance but the assistant in the camera section advised John the the charger was proprietary and available only from the Samsung website. As we were checking cables for Pauline’s phone and looking among those a young male assistant from the computer section asked what we were looking for. He had limited English but seemed determined to solve a problem. He checked John’s camera, extracted the battery, and headed back to the camera section where he produced a multi-way charger that he suggested would do the job. That package was not cheap but it also included the cable that Pauline needed so even if it did not work for John it would not be a complete loss.

Shopping done we found a cafe with prepared rolls for lunch. Majella and I shared a ciabatta with egg, tomato, mozzarella and basil. John and Pauline shared a baguette with chorizo and peppers. After lunch we walked back to the car and drove to a parking station near the Musée Bretagne.

The museum had an interesting permanent display of artefacts tracing the history of Brittany from paleolithic times to the present day. The most interesting periods were probably the migration of Celts from Great Britain and their interactions with the French. There were many examples of interesting artefacts across the long arc of history.

There were also 2 special exhibitions. The first highlighted the history of railways in Brittany.  Being the daughter of a railway engineer and growing up in the vicinity of a significant shunting yard, Majella was unable to resist the opportunity to play at driving a train. The exhibition traced the development of rail from the east to west across the southern and northern coasts of the Brittany peninsula and the links between. The second special exhibition recalled the Dreyfus affair for which the original trial was held in Rennes. Dreyfus was accused and convicted as a spy on the basis of concocted evidence and a touch of anti-semitism. He spent several years in exile in Guyana before his name was cleared through the persistent efforts of his wife and supporters. 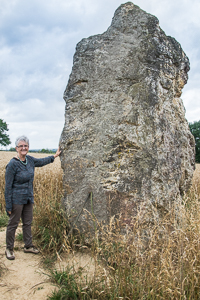 From Rennes we headed north. John had identified the Château de Couellan as worth a visit for its listed gardens and determined it was near Guitté where might might also see some megaliths. As we approached Guitté we saw a sign that directed us to the megaliths. It was some way off the main road but eventually we saw the single stone standing in a field of wheat. There was a parking space nearby so we stopped and walked in along the well beaten track. As we walked back to the car already satisfied with our find we spotted a group of stones on the other side of the road and were able to walk to those also. The size of the site was impressive and much more than we had expected.

In nearby Guitté we checked the signs and found our way to Château de Couellan which was much closer to Caulnes than to Guitté. The chateau garden was less impressive than we had hoped. It really was a relic of the glory days of the French aristocracy and by now very run down but it was possible to see that it had been a grand establishment in its day. As we began to walk out the woman who lived there approached and offered us a tour inside for 5 euros each but that would have taken an hour we did not have so we declined.

Majella had tagged me as cook for the night but we needed meat for the curry I would be making. We knew that we would be unlikely to find that in Penguily or Saint Glen so I turned off toward Trémeur where the sole shop was closing and had no meat in any case. Majella asked a woman who directed us to Broons were we were able to buy some steak for the curry.

Cooking in a strange kitchen after a long period of virtual retirement from cooking was a challenge. The curry worked OK but I had not cooked rice other than in a microwave for many years and the rice was not quite what I had hoped. Nevertheless it fed us and Majella’s Far Breton from last night filled any gaps.